On https://webkaart.hoogspanningsnet.com/i ... 62/12.2095 one can see the track of the underground cable of HVDC Kontek ( https://en.wikipedia.org/wiki/Kontek ) in Rostock area. Which was the source of the track?
Omhoog

The Kontek cable was mapped initially in 2016. In that era, the toplevel grid of Germany was mapped by Knarvel and Peter. The Kontek however was mapped a few months earlier than the 50 Hertz concession. It was considered as part of mapping the Danish grid, for which I was the responsible mapper.
The source is probably documentation of Energinet and for the Rostock area it might be a combi of Energinet and 50 Hertz reports or operator website images, but that was not logged. Most likely it were PDF gridmaps used as an image somewhere in an Energinet or 50 Hertz report, which I used as a screen overlay in Google Earth. Precision will in both cases be limited to about fifty to hundred meters.
Omhoog

That is indeed a larger deviation than about hundred meters, making clear I had used another source (as mentioned, very probably it was some map or document of Energinet). Some times there are two or more sources contradicting each other. We suffer about that for the grid scheme as well, but it is inherent in mapping and researching things like this.

When applying the image to the map using a not-that-fancy but rather effective tool (GE screen overlay), it looks like this.
I definately agree this is unacceptable - of course considering the map in the 50Hertz report is correct, and we can see also this drawing of 50Hertz itself is not that correct as we apply the overlay and look for the positions of the main roads, the harbour and the dot named Bentwisch.


In the previous years, this trick was applied dozens of times before with source material of foreign grid operators to derive cable tracks with acceptable precision if no other source is available. It is just the best we've got since hidden layers in Openstreetmap are not open to us to be reused. It poses a danger of deforming the images and tracks because sometimes the reference landscape (roads, coastlines) are course or deformed. Then a middle way between warping the image and deriving the cable track needs to be made. In this, we just trust the mapper for a wise decision. 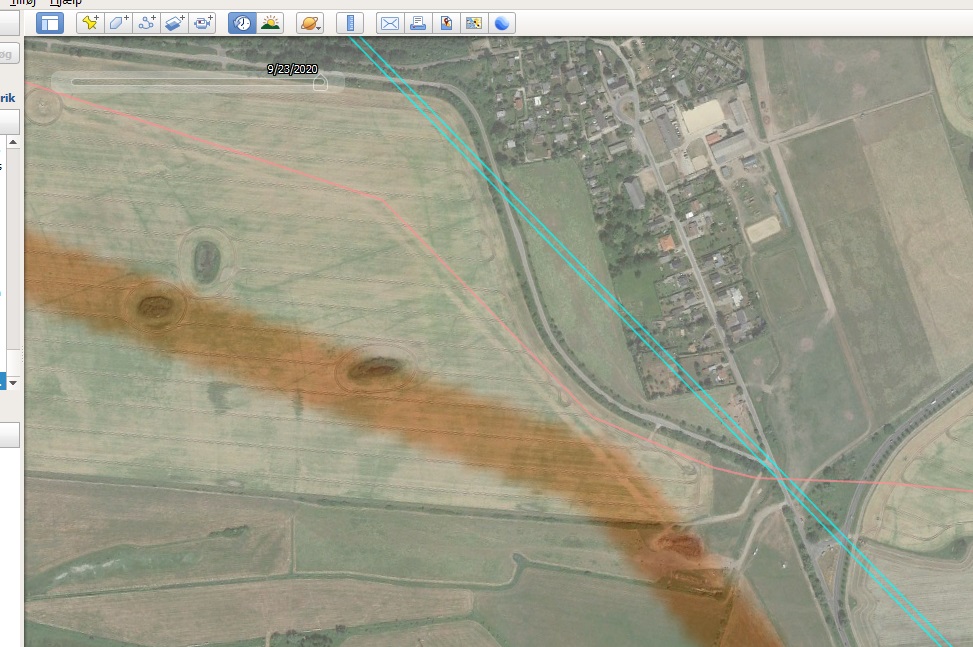 
We see the as-best-as-it-gets screen overlay of 50Hertz, underlayd by the actual gridmap showing the current drawing of Kontek. In the ground of the wheat field, one can clearly see excavation damage. No doubt the cable is there. But in the right lower corner, the cable starts to veer off course considering the 50Hertz map.
Most of the time when a cable is mapped, a combination of this overlay trick and clever judgement of traces in the landscape or soil are judged alltogether by the mapper in order to make the best decision.

Here we have the revisited track, this is the best I can do with the current source materials: considering joint locations (small concrete houses in fences in the fields), excavation damage, tracks in the soil and the 50Hertz map. Up to you to judge.

How good works in-situ mapping with a portable GPS-device and a magnetometer? In principle it would work with a compass.
Omhoog

Not sure how well it works. It depends not only on your compass, but also on the operation scheme of the HVDC-plan.

Speaking for myself, just a month ago I actually tried this exact same thing with my old boy-scouts compass and the COBRA Cable at Eemshaven. Result: disappointing. No serious effect was shown, in spite of checking the actual loadflow (at that moment the cable was driven almost flat-out 700 MW) and also there is no doubt that the location of the cable was correct. This was the observation spot: 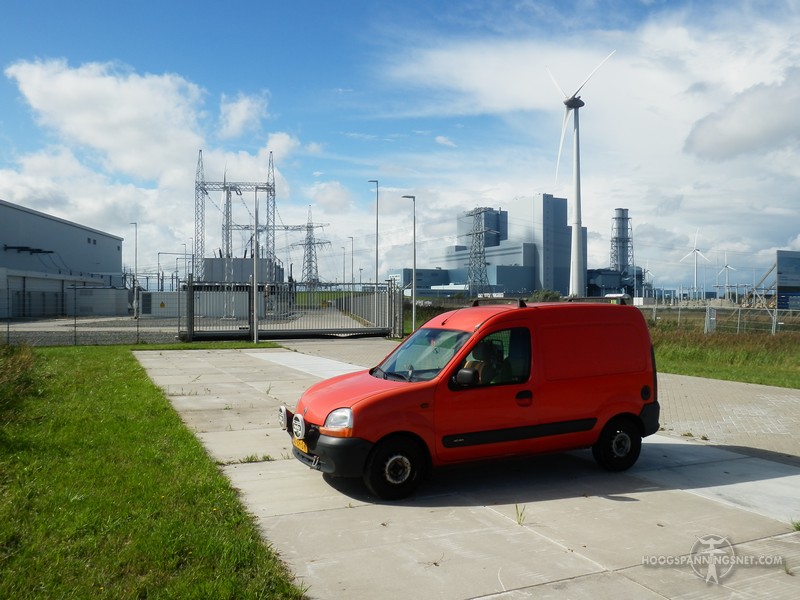 Tha car was parked right at the doorstep of the converter itself and I know for sure the poles areexactly underneath this nice private parking spot. I did some transects in several directions, but no significant effect was there to be recognized...

in theory a HVDC pole driven at several hundred kV and well over one thousand amps must result in an impressive compass deviation. They even make notice of it at nautical maps when overcrossing such a cable. It looks promising, but probably the operation scheme of the HVDC-link spoils it.
For the somewhat older schemes driven as a monopole with an earth return by two ground electrodes, the sole conductor has a significant static field. The Baltic Cable is operated in such a scheme. Kontek has as far as I know a metallic return, but I have to look that up. If it is, it might work as well if the return conductor is not in the direct vicinity of the HV pole. For a closed-circuit bipole scheme such as BritNed or COBRA, it will depend on how close both conductors are buried relative to each other. Speaking for my own experience, it is harder than it might look like. But it could have been worse: NorNed is carrying both poles in the same physical cable, separated by only 15 cm or so.

So, to conclude - this looks like a fruitful test case for people here to cross an underground HVDC track somewhere out in North-West Europe.
Trots geboren in het 110 kV-gebied
Omhoog

The magnetic field generated by HVDC cables is probably very low due to the minimal distance between the cables for each pole.
Ill have to do exact calculations but it would surprise me if these rise over the earth magnetic field (about 50uT in Holland).

Details of the physical cable(s) itself I don't have but the exact trajectory is available within one or two meters, which is to be considered sufficient for this purpose.

The car at the photo is not parked exact on top of the COBRA Cable, although the car was parked with almost nuclear precision right on top of something else. Since it was too far offtopic I didn't mentioned it before, but below the weels another major cable runs: the Gemini 380 kV AC cable.

I parked the car exact on top of the AC-cable for the purpose to step out and touch the metal with my fingertips, to see whether I could feel the induced charges 'humming' in the platework. For an overhead line this works pretty well, but I never tried it with a juicy underground AC cable in flat configuration and this was a cool opportunity. With the car exact on top of all three conductors, the effect was minimal and that was conform expectation. Far less than with a proper overhead line. Then I moved the car eight meters out of the cable track to feel if there was difference between all three phases below the weels, or just one more close by. Maybe it would have been if I tried first only four meters or so, because at eight meters the whole effect was almost disappeared at all. But at least it confirmed what should have been observed theoretically.

After that experiment I walked twenty meters further towards the fence, right on top of the COBRA track. There the compass experiment was tried. The place of that observations is exact on top of the cable. You can look it up for yourself in this impressive document, which includes at page 199 a very detailed CAD construction site drawing complete with the track of both cable poles. (It is now also applied at the grid map.)
Trots geboren in het 110 kV-gebied
Omhoog

On https://hinweisplattform-kontek.vdesk.cbe-digital.de/ you can find a better map of the track.
Omhoog
Plaats reactie
9 berichten • Mastvak 1 van 1